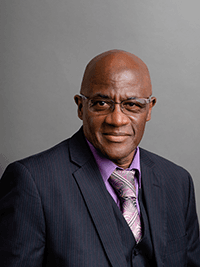 Commissioner Marion Stevens is the oldest of five children, two boys and three girls, reared in the Midway community of Liberty County. He matriculated in the Liberty County School System and is a 1968 graduate of Liberty County High School. Mr. Stevens joined the US Army in 1969 and served as a paratrooper for four years.  Following his tour of duty in the Army, Mr. Stevens worked as a heavy machine operator. In 1976, he pursued his studies in Mortuary Science by attending and graduating from Gupton-Jones College of Funeral Services in Atlanta.  He completed the required one-year of study and three-years of apprenticeship. He obtained his Licensed Embalmer and Licensed Funeral Director Certifications in 1982 and 1984 respectively. He is a contract Licensed Funeral Director and Licensed Embalmer.  He worked for Gulf Stream Aerospace for five years from 1982 to 1987. Mr. Stevens would start working for Interstate Paper in 1987 and would retire successfully in 2014, for a total of 27 years of dedicated service.

Mr. Stevens has been active in the Midway community for many years. He is an active and lifelong member of the Thebes African Methodist Episcopal (AME) Church, currently serving as a trustee. He has served as a certified volunteer firefighter and medical responder for 38 years. He has served on the Liberty County 911 Board for 26 years. Being active and involved in the community led Mr. Stevens to eventually run for County Commission in 1998.  He took office in 1999 and is one of the two current longest serving Liberty County Commissioners.  He was appointed by Governor Roy Barns to serve a four-year term on the State of Georgia Probation Board (1999-2002).

Mr. Stevens was married to the late Carolyn B. Stevens for 37 years, and he is the proud father of three children and five grandchildren. Mr. Stevens lives with these two Bible verses in mind: