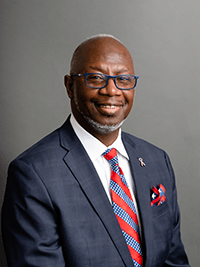 Commission Chairman Donald L. Lovette is a native of Liberty County, Georgia. He is a 1973 graduate of Bradwell Institute High School. He is also a graduate of North Georgia Technical College and honor graduate of Brewton-Parker College.

Mr. Lovette retired December 18, 2020 as the Director of Laboratory Services for Liberty Regional Medical Center, Hinesville, GA, where he worked for  45 ½ years.

Mr. Lovette is a lifelong member of the Pleasant Grove AME Church, Hinesville, where he serves as Steward Pro-Tem, Men’s Choir Director and New Member’s Class Teacher. He is also a member of a family quartet, the Gospel Cousinaires.

Mr. Lovette is the father of two biological children: April Lovette Whitaker and Aaron Lovette. He is the grandfather of seven. A long time mentor, he is also the proud father of several surrogate children.

Mr. Lovette is a history buff, especially as related to the history of African Americans in his native Liberty County. He is best known for coining the phrase “Liberty County Proud.” He is also a local playwright, having successfully established Love-It Productions, Inc. in 2007.

His personal motto is “by helping others, one helps himself.”