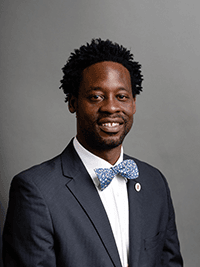 Commissioner Justin Frasier was born in Liberty County to the late Charles Frasier and Mrs. Shirley Frasier. He’s the youngest of three children. Mr. Frasier is a 1999 graduate of Liberty County High School. Because of his talented musical skills in percussion, Mr. Frasier was recruited to attend Morris Brown College in Atlanta to play in its dynamic band. While there, he also played for its collegiate golf team, graduating in 2003. He later matriculated at Savannah State and is currently attending Fort Valley State University to obtain his Masters in Public Administration. He received in paralegal certification from the University of Georgia in 2010. He stayed in the metro Atlanta area for over ten years, and learned a lot before returning to Liberty County in 2010.

Mr. Frasier has been employed by Interstate Paper for the past seven years. While working a full-time job, he got the entrepreneurial bug and decided to open his own barbershop in April of 2018. In addition to this local business, Mr. Frasier opened the Southern Investment Group in April 2010 and HUTA Essentials in August of 2020. Mr. Frasier has a passion for politics; he ran in 2012 and became the Commissioner of District 2. While serving as a commissioner, Mr. Frasier presently serves as Chairman of Young Democrats of Liberty County; Vice Chairman of the Hinesville Development Authority; Vice Chairman of the Regional Water Resource Council; and serve on several ACCG committees. He collaborated with Commissioner Marion Stephens in having the Board of Commissioners institute a Youth Commission Program.

Mr. Frasier is very active in the community. He is visionary and very interested in seeing Liberty County growing stronger as a regional economic powerhouse, with a very diverse economy. He is interested in building partnerships with the Liberty County Board of Commissioners.

He is married to the lovely Brittany Frasier and is the proud father of two children, with a third on the way. He and his wife are members of the Mt. Zion Missionary Baptist Church in Hinesville.